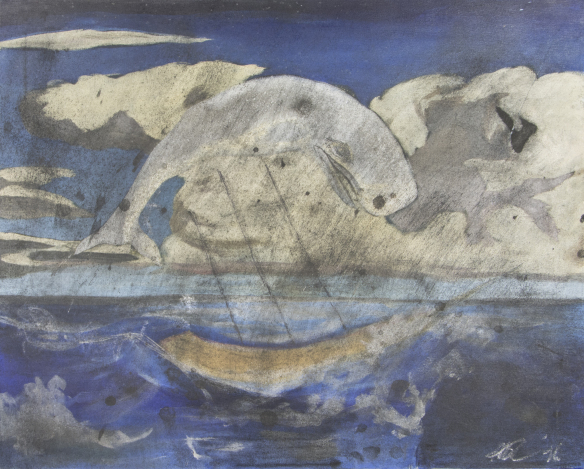 Ishmael enters the Spouter-Inn and encounters a curious, hard to discern large oil-painting, all the while speaking in the second person past: “But what most puzzled and confounded you was a long, limber, portentous, black mass of something hovering in the centre of the picture over three blue, dim, perpendicular lines floating in a nameless yeast.”

Such brilliance describing a mysterious “besmoked” image, somehow connecting storm and night and ship at sea. “Yet was there a sort of indefinite, half-attained, unimaginable sublimity about it that fairly froze you to it, till you involuntarily took an oath with yourself to find out what that marvellous painting meant.” And eventually landing upon the idea that it was somehow a whale about to impale itself upon broken masts.

The brilliance here is to gently open the reader up to his or her own subconscious and the messy, smudgy imprint that each of us has discovered in ourselves of vague, phantom-like, impressions of partial creative magic and partial destructive force caught in limbo (as they always are).

All that in just a few scraps of language. And then moving further into the inn, discovering all the beds are taken, and then being offered the sharing of a bed with a harpooner and accepting without knowing a thing about that harpooner.

And so, of course, arises the harbinger of Queequeg — one of the great outsiders of American and English literature.