I’m quite happy to report that my short story, “Litter Entries,” has been posted online at the literary publication Philadelphia Stories website. It did not win in the Margarite McGlinn Fiction Contest, but did indeed make the final cut as an Honorary Mention.

“Litter Entries” operates on a lot of levels. It takes place in a fictionalized version of LOVE Park in Philadelphia. I began to write this piece in 2012 before the park got completely remodeled. For awhile I figured I needed to add all that change to the story. The new LOVE Park is nothing like the old one. However, I realized as I wrote and re-wrote that the story was beginning to happily hover between both the old and the new worlds. Plus, we ourselves as a nation were (and are) going through quite a lot of change and remodeling ourselves. Everything’s hovering between what is virtual and imaginary and what is solid and real.

Besides, no story about LOVE Park can do it justice easily. Perhaps a novel or a feature-length movie could get closer than I have with this short story. The thing is, LOVE Park doesn’t get its appeal and mystique because of topographical features or even the famous alphabetic statues. Like any important place, it’s all about the people passing through and sitting there, and, maybe especially, the folks trying to live there.

What got me writing originally was a chance moment one hot afternoon. As I walked to my train stop, I saw a group of old guys — black, brown, white — some shirtless, some smoking cigarettes, a few drinking out of paper-bag-camouflaged quart bottles. Everyone of them was watching two guys play chess. The most captivating aspect of this scene was that one of the chess players was a businessman in a dark suit, wearing expensive loafers, probably in his late thirties, stylish fade-type haircut, designer glasses, and a big class ring of some sort on his right middle finger. The other player was a scraggly, bearded older black gentleman, with stringy dreadlocks, wearing an over-sized tank top, Bermuda shorts, and fuzzy rabbit slippers. A long, dark, thin cigar — what in the old days they would call a cigarillo — dangled from his lips and a stream of smoke danced and spun up the side of his face, mixing with his dreads.

For what it’s worth, it seemed like the two guys knew each other well and the whole group watching was witnessing something that happened fairly regularly. I don’t doubt there was money wagered on the outcome of this face-off.

None of that got into my story, though. But it certainly got into my head. My main thought should be fairly obvious, so I don’t think I’m giving anything away when I say that the principle idea driving me to write was the connection between regular everyday litter around the park and the question of how people perceive homeless people, i.e., as human litter.

I had a lot of fun with this story because that question of human litter I originally let leak into the story through a relationship the narrator/journal-keeper has with a high-end, high-maintenance girlfriend studying to get her PhD in art history at Penn.

In the end, a lot of stuff was cut from this piece, like the girlfriend. For me, editing, cutting, and re-writing is always the most fun I have on projects. What I was left with after several years of work on the editing side are the most important entries and descriptions of characters and moments. Here’s a snippet:

A new kid named Miggy has taken to sleeping all day on a subway grate. He appears to be pretty young, maybe sixteen. He wears baggy jeans, no shoes, and a dark blue tee-shirt too small for his belly which sags onto the grate when he rolls on his side. Cool air spins up from underground, but it smells like a mixture of Pinesol and piss. Miggy wakes up, talks to 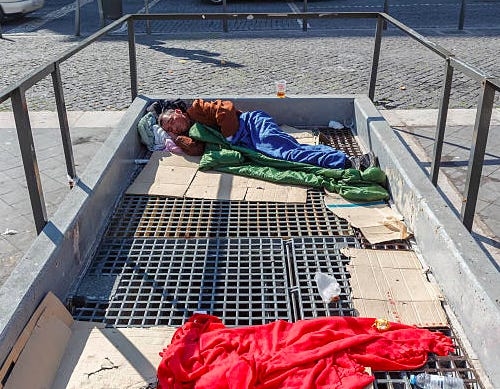 himself, heads off to the piss area, then comes back and lies down, curling one arm around the top of his head and the other under his face as a pillow. I find a piece of foam rubber in the trash late in the day and clean it off as best I can. When he gets up to pee I place the foam on the grate where he sleeps. He comes back, stares at the foam, then tosses it onto the sidewalk.

When he talks to himself sometimes, I hear, “I am not a toy. They can’t do that.” He whispers a good amount, but he also says those words over and over again out loud. “I’m not a toy.” It’s not like he’s actually mad, or annoyed even. It’s more like he’s trying to convince himself that he isn’t a toy. And that it actually shouldn’t be possible to make him feel like one. “They can’t do that.”

“Litter Entries” did not place first, second, or third in the contest, but honorable mention along with five other great stories is good enough. I read the winning three stories and they are quite good indeed. Joe Dornich’s third place “Camp Vampire Kids” is a touching tale of teenagers who can’t be exposed to sunlight. Patricia Sammon’s second place “Clay” takes the reader back to digging tunnels past the German lines during World War I. And Roger Hart’s “Mysteries of the Universe,” which took the grand prize, describes what may well be a great love for the narrator and what happens when life with other people gets complicated.

My hearty congratulations to all three of these writers and the other honorable mentions. This fall’s edition of Philadelphia Stories is wonderful. You can find it online here and it will definitely be popping up around the Philadelphia region over the next few weeks. It’s free. Go here for info on where it can be found.